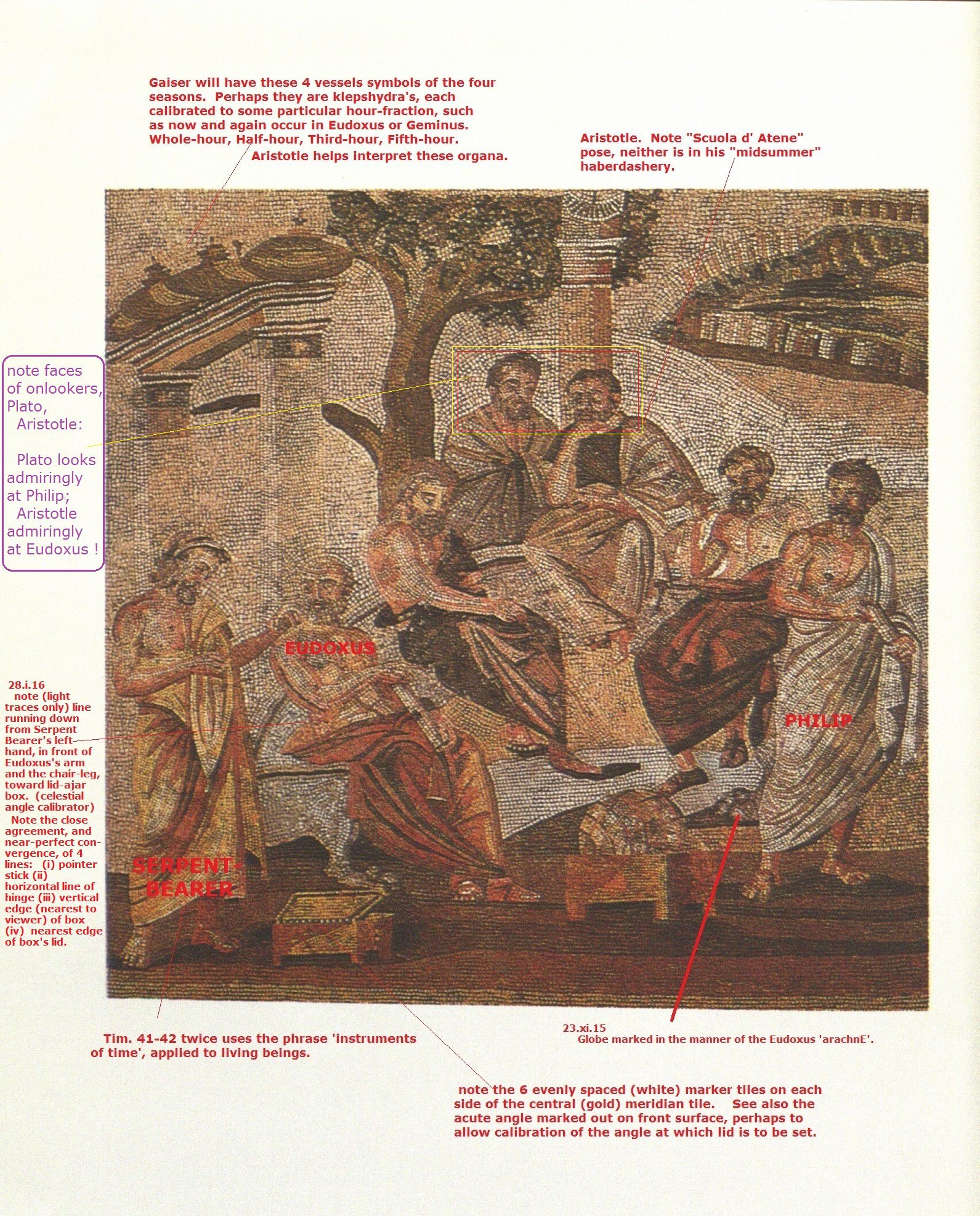 Do have a close look at this following remark from Edwin B. England and my added point about Thesleff’s “joint search dialectic”

12.vii.20   this file gives a significant set of pointers to a ‘katholou’ implicit within the logically more generic Dyad of Greater/Less.  The super-specialist coinage when the Science of Logic was still taking form in young Aristotle’s still-academician’s thought processes.   It is now credited to Aristoteles pseudepigraphus:

The image here subjoined makes a preliminary effort to decipher the phrase ‘aei pleura’ at Tht 148a3, fol 43v four lines up from bottom of Ephraim’s column A:

The first of the two words in this phrase are untroublesome as to their reading — unambiguously the 3-letter variant of the aei-aiei choice.   Curiously enough, this reading puts Plato’s choice of variant so as to mis-align himself with both (a) Thucydides and (b) the 7 exemplar’s in Chapt 1 of Euclid Book X.

This second basis of comparison basis (b) (7 of the 4-letter variant represents a majority of the 10 occasions now inside Euclid, this chapter of this book.   This is a significant basis, and   But this sevensome of the 4-letter variant puts Euclid so to speak out of alignment with himself.    Or at out of alignment with the flock-or-athroisma of what we may borrow a two word phrase from Plato’s dialogue the eponymous dialogue Theaetetus.   It is a risky comparison for me to make, but I will make it nonetheless:   as Eva Sachs, student of Wilamowitz put into Theaetetus’s mouth the phrase never once found in the Euclid mss. {admittedly once in De Lin. Insec.} ‘ek duoin onomatoin’.   I, student of Thesleff,  am being bold to put into the  same author’s mouth — Theaetetus namely — those 7 aiei variants, all of which indeed do indeed appear in various very good ms. of Euclid.

Historians of mathematics whom I have consulted on the matter have been to a one convinced that Book III of the Elements is reliably traced back to writers very near Plato and the very young Aristotle — at the Early Academy near mid-4th century BC.   There is some uncertainty and further discussion of this is ongoing still in 2020, about precisely where the work of Theaetetus belongs, within the litany of mathematicians set down originally by Aristotle’s student and colleague Eudemus of Rhodes.     The date of Theaetetus’s death, early on in the scholarly discussion set to 369BC, remains a matter of lively presentday discussion amongst classical scholars.   Strong arguments have been presented for pinpointing his death decades earlier.    However this may be, this litany of early mathematicians is repeated and discussed in some detail by Proclus, his Commentary on Euclid Book I.   This website will take it as one key point the dating of work within Books III , X and XIII of Euclid’s major work.   This will require detailed attention to the Scholia to Euclid, and to his texts also.    Here is a sample, from late in Book III, which will have relevance to both the logical and the sequences, both the sequence of history of mathematics, and that of the internal stemma of argument-structure.   Here is a sample, which exhibits both:

Proclus, as officer within the succession of heads of the Academy (his standard descriptor is ‘    ‘, meaning just that:  as Pope Pius XII was official successor Vatican, so Proclus in the Academy.   One might expand the metaphor with help from both the ‘philosophenmosaik’ in Naples [a primary theme here at youngersocrates.com] and from Rafael’s famous mural.  Men of the eminent stature  of Michelangelo and Leonardo carry the special and the signifying weight on this side of depictions of Plato’s school.   Here again we have standard descriptors in ‘divine’ Plato and ‘inspired’   Aristotle.  It is a very Greek  set of ideas, this of a Diadochos following on certain progenitors, higher up than mere Heroes or even Saints per se.   A little etymological sidelight can help here, a comment on the name ‘Desdemona’   Her roots are a pair of Greek words, the first part being ‘fear of’.    The second goes back to demonology, or above-mortal sources of inspiration.

Few would begrudge to him what E.R. Dodds claimed about his central ‘person’ (“Missing Persons” 1977, its final chapter) an indwelling ‘demon’, making use of Dodds’s name.  Was  he not patient and passive and experiencing some form of trance as he cried out words [in Greek, of course] — words from the chorus of Euripides Baccae ?       He fairly exploded, and passively observed as there coursed out of his lips, there as he did a para-psychology exorcism.   His report has him performing this exorcism, whereupon presto!, all the 4-footed earth-crawling vermin tele-transported off the premisses.   Clearly not Dodds’s own person at work;  rather the indwelling demon of whom he writes, it was ‘using my name’.   Odd, but likely true.   Recall the desi-demonion that our colleague Socrates used, or that used Socrates.  This Renaissance Man Dodds turned up historically somewhat too late to be a proper part of the Renaissance.   But if we prescind from history, he stands as a spirit, capable of  publishing an anti-Nazi screed warning in the London of war-torn 1939.

Europe has known wars aplenty.   A certain jewish man in Amsterdam, when I spoke to him about ‘Armistice Day’, made a telling remark.    This conversation took place place aboard his floating rental houseboat in a former jewish ghetto within Amsterdam.   I had noted that in the US of A we commemorate Armistice Day, as near as possible to 11 AM local time.  He posed a sharply worded question:   ‘which war was that, settling of which is today commemorated on 11 November’?   Probably 2010AD.    Our family had invited a guest aboard, a man from Massachusetts and not so incidentally with a jewish ancestry.  The landlord had named his houseboat ‘Te Koop’ which I later discovered means ‘For Rent’.     In any case this houseboat owner was not entirely unlike Spinoza — about whom our landlord knew much more, as soon came out, than he did about the Versailles Treaty.   The conversation stayed up at the trans-personal level, however, so it never came up that some of the inequities within The Versailles Treaty may have impacted a man his age (about 60).    Spinoza and this man were rejected — by the ‘monde’ of the West of his day and by own his own flock or school, or tribe.  In those ways Spinoza and Dodds — and Oliver Sacks too, I may add, Sacks the grateful-for-life man — they all stand shoulder-to-shoulder ‘brother alongside fellow being’.   They all went out, or were soon to go out, in a way our anglo-American mathematician Lord Bertrand Russell admired.    Russell cordially disliked the hyper-Christian Leibniz, whilst he just as cordially revered Spinoza.   I went ashore and fetched a photocopy of Russell’s popular book [from Free University’s copy] on Philosophy of the West. which my landlord read eagerly.    Quasi Pythagorean, we may think these people, successors of Pythagoras.   In Russell’s case, this traditional fealty was publicly avowed (preface to his Autobiography).

Some would certainly think it presumptuous to construct parallels between ecclesiastical and secular this way. and of the divine to the merely super-heroic amongst or mortals, stand-out from the flock or herd though they surely are.   The Renaissance Human was more-than=human, even where of impiety in the very in his  official successor.   No unclarityissues concerning quadratic and cubic irrationality, to include specifically what Plato has his young Theaetetus point to in the classical locus of ‘dunamis’ theory in the form we now have elegantly preserved by recent editors Heiberg [late 19th cent.] and Stamatis [late 20th]

Please give it the necessary close look, this snapshot of the TLG text of Euthydemus.   In particular please look closely at that dialogue’s cluster of  the key term aei/aiei,

Now in Chapt. 22, which runs to only 32 lines, it is given a striking emphasis by being put inside quotation marks by the always-careful Oxford editor John Burnet.

Such ‘encrustation’ is of course open to a reasonable reader’s scepticism.  John Cooper inaugurated this point of criticism in his Complete Plato,  (Hackett, Indianapolis 1997).  On the other hand this is Plato’s way of writing our ‘eternal’ or ‘always’.

This is clearly a term Plato puts much emphasis on.   Further, it is a concept close to the heart of Amphinomus, who is well known to Proclus and other commentators on Euclid.   Plato had used the term in many of the centrally platonic contexts — well over 700 specimens  of this occur corpus-wide — either in its 3-letter or its 4-letter variant.

This seemingly small variation of spelling has a very direct bearing on the report in Dionysius of Halicarnassus — the remark that Plato was fond of and preferential towards a diphthongal pair of letters, instead of using the simpler monophongal variant.   This latter variant, == which I have echoed here just a dozen or so lines below this — harks back to an earlier, Pre-Plato Attic.

Quite possibly young Theaetetus grew up writing this older style of Attic in Sunium, as witness the 70% preference shown in our best ms., Chapt 1 of Euclid X, where it very likely to be Theaetetus’s authorship.   This is exactly where potentially infinite ongoing mathematical processes come over the mathematical horizon in early Greek mathematics.

On the literary side a chief model of that centenary-earlier writing is Thucydides, who favors it by a 128:0 ratio over the simpler form   ἀεὶ  .

Here is the snapshot of our ‘flock’ of  αἰεὶ

AIEI, clustering in Ch 22 of Euthyd